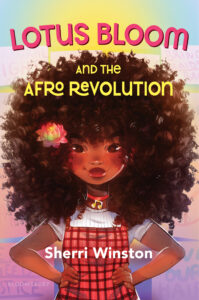 A new book is coming. A new book’s almost here! Oh boy, oh boy, oh boy. So, maybe that’s not the most dignified way for an author to react to the upcoming book release. Well, so what? I’m not the Queen Mother. I’m excited. More than excited—I’m thrilled.

Lotus Bloom and the Afro Revolution is the story of a 12-year-old violin phenom who earns a place in a prestigious magnate school music program only to have bullies and a flawed interpretation of a school dress code threaten her first chair.

A local news story one morning in 2013 told the story of a Christian middle school girl who was facing suspension after reporting classmates for taunting her about her natural hair. I watched that report, fascinated, outraged, emboldened to do something.

The young lady, slight-built, sat quietly beside her irate mother as mom explained to the reporters how her child was being picked on for the frothy corona of natural hair floating around her delicate face. “There have been bullies in the school,” her mother is quoted saying to the local CBS affiliate. “There have been people bullying her around her hair, and it seems like they’re blaming her for it.”

I thought about the mother’s frustration, not to mention, the daughter’s anguish. At the time, I was knee-deep in other writing projects and was blessed to get one writing job after another. Still, over the years, that story stuck with me. Occasionally, I’d take time to work on the character, build the environment, craft a tale that would share the details of that story from years ago that I’d never quite forgotten.

Finally, in 2021, I was able to sell my idea to Bloomsbury Publishing. Now, a year later, Lotus Bloom is born. All of the books we write feel like “our babies.” However, Lotus has a special place in my heart. I was able to craft a quirky, off-beat, musical character who wasn’t immediately willing to be “the hero” of the story. I wanted to examine how a non-combative, music loving little modern day hippie would handle a very real threat to her freedom and possibly the freedom of choice of others.

The result is a story full of heart, humor and nuance. Lotus is supported by a strong cast of characters who buttress her strengths and weaknesses. My hope is that this book will not only speak to the kids who are ripe for a revolution, but to those who are hesitant how to handle themselves when pushed. That would have been me. I never sought confrontation at that age.

But push me too far and, well, I had to push back.

Out Tuesday, Sept. 6, Lotus Bloom and the Afro Revolution. A lot of thought and hard work have gone into this, which will be my eighth middle grade novel—twelfth book overall.

See you in the reading room!