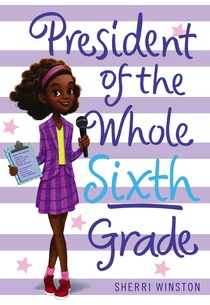 Authors love, love, love it when reviewers say awesome things about their work. Check out this review for President of the Whole Sixth Grade courtesy of the American Library Association’s Booklist Magazine:

When we last saw Brianna Justice she was on top of the world, fresh off the victory of being elected president of her fifth-grade class. But nothing bursts her bubble faster than starting middle school, where no one really cares about things anymore and everyone is trying to be someone else. Worse, two of her longtime BFFs have started blowing her off to hang out with a pair of nasty “popular” girls (the Peas). To top things off, Brianna has to contend with a rival who is determined to see her middle-school political career fail, and she only has a limited amount of time to raise money for the class trip to D.C. But Brianna has never been scared of a challenge, so she gathers up other allies and her trusty clipboard and gets to work. Brianna’s determination and follow-through make her a great role model, but the true value here is the very real depiction of the ebb and flow of middle-school friendships and the difficulties that come with growing up. An important resource for anyone who’s ever been in Brianna’s shoes.

Tagged authorsbook reviewsBooklistbooksbooks for childrenPresident of the Whole Fifth Grade