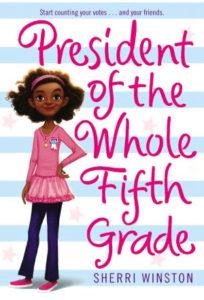 Why is it so important for Brianna Justice to become President of the Whole Fifth Grade?

Brianna and her friends Sara, Becks and Lauren create a “club” to encourage each other to save money—The Woodhull Society. Victoria Woodhull was a pioneer, fighting for women to have the right to vote and ultimately running for president.

“A Chicken in Every Pot” was a popular slogan for Herbert Hoover’s presidential campaign during the Great Depression. Discuss the significance of this slogan and how it applies to Brianna’s campaign.

This story revolves around friendship. How does it affect the girls’ relationship when Brianna befriends Weasel?

From Ch. 23, “Baby Ruth: More Than a Candy Bar!” Brianna asks: Were Sara and Lauren right? Had I let the idea of beating Jasmine Moon become more important than anything? Discuss how students set priorities. What is more important—friendship or winning?

Discuss becoming a young entrepreneur. How can your students put their skills and talents to work? How much would it cost to start? What tools, equipment, setup would they need? How will they determine the difference between how much they earn and what their profits are. 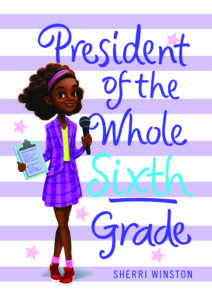 Brianna Justice believes in setting goals and her goal is clear—she must earn enough money to ensure the class trip to D.C. Discuss with the students how they set goals and how they make plans to ensure their goals are met.

In Chapter two, Brianna starts out telling us, “Rome is burning.” There was no literal fire. Discuss what she really means. How was the “fire” disrupting Brianna’s plan?

In this story, Brianna spends a lot of time analyzing and thinking about what it means to be in middle school. She calls it “The Land of Fake Believe?” Ask the students “why”? Do they agree or disagree?

In journalism class, Brianna gets involved in a heated debate with classmates about an article. A homeless mom, living in her car with her kids, gets arrested for leaving kids inside the car so she could go to a job interview. While several students believed the police should have taken mercy on the mom, Brianna felt strongly that the woman should be arrested. Ask the students to discuss their beliefs as well as solutions.

Even though Brianna feels committed to abiding by the rules, even if when making the hard choice of jailing a homeless mom, she is equally committed to breaking the rules for friendship when it comes to the girls shaving their heads. As the students to discuss how they feel about that. Is Brianna a hypocrite, or a hero?

How would your students compare middle school to life in Ancient Rome?

Sharks in the Mall. In the “Pompeii” chapter, Brianna and her friends reach a turning point. Brianna is convinced her friends are being set up and making poor choices. Her friends feel like Brianna just wants to boss them around. Who’s right?

Brianna gets drawn into a real-life political drama and feels strong about playing a role. Ask the students to think about the news right now. Discuss what topics interest the students wish they could influence or change.

One major theme of this book is how we stereotype each other. Have the students discuss a time when they think they were stereotyped, whether it was because of their age, race, the type of music they listen to—name a time when you think someone jumped to a conclusion about you. How did that make you feel? What would you like this person/people to understand?

Brianna shifts from recipes to reporting. She is drawn into a feature story about a group of girls at a school in a low-income area. Do you separate where someone lives from the type of person you expect them to be?

A huge wake-up call for Brianna comes when students at the other school are hostile toward her because of stereotypes they’ve made of her. What do your students think of that?