We never met, not officially, at least. Stuart Scott, the courageous ESPN sports anchor with the contagious wit and zest for life, succumbed to his fight with cancer on Sunday. Despite never sharing a single how-do-you-do, he and I were besties. In my head, at least. 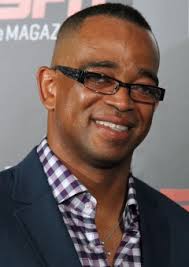 On Sunday, during NFL Countdown, ESPN invited Good Morning America icon and ESPN alum, Robin Roberts to pay a stunning tribute to Scott, who at age 49, lost his third bout with cancer of the appendix. As Roberts so elegantly revealed the paths and passages of Scott’s trailblazing life, not to mention his unending love for his two daughters, I couldn’t hold back my own tears.

In this day and age of social media and electronic relationships, it’s not difficult to feel connected to someone whose handshake you’ve never felt. Yet, my bond with Scott predates Twitter and Facebook; Youtube and Instagram. For decades he and I have done a sort of cosmic dance, circling each other. He was a brother to me, not in the vernacular but in spirit. Check this out:

In 1990, I worked for ESPN. While working fulltime for the Hartford Courant’s sports department, I decided to put a childhood fantasy to the test. ESPN was headquartered about 45 minutes away, in Bristol, Conn. I called the producer of High School Sports America and asked if he’d let me take him to lunch to discuss his job. He agreed. A short time later, he created a job for me – and I jumped at the chance.

The opportunity to glimpse Dick Vitale strolling the labyrinth of ESPN trailers or bumping into Dan Patrick in the lunchroom, man, that was nirvana. And when I passed Robin Roberts in the halls a few time, I nearly went all fan girl. But you know, I kept my cool.

While I was at ESPN, Stuart Scott was an up-and-coming newsman working in Central Florida WESH TV News.

My career trajectory was set in newsprint. So as much as I loved being at ESPN, when an opportunity came to work at a newspaper in South Florida, I took it. I left two-and-a-half years before anyone had ever heard of Stuart Scott nationally. But that would change.

Seemingly out of nowhere, in 1993, this guy appears on the TV giving sports scores and doing stories with swagger. I mean, saying things like: “Boo-yaa” and “cooler than the other side of the pillow.” My kind of talk. Stuart Scott didn’t just tell us the sports news, he did an open mic night — night after night. Brash and buttery, all at the same time. And the instant I saw him, I couldn’t help thinking, What if I’d stayed at ESPN?

He brought younger folks into the conversation in a way I’d only dreamed of. In a way I wished I could have done.

From that point on he became an icon. A fixture. He was that guy on ESPN. “He’s crazy, man,” friends of mine would say. “Did you hear that guy last night?” dudes crowded along bar rails would ask.

I crossed paths with Scott a few times. In an airport in New York; a few times at NABJ (National Association of Black Journalists) conferences. Always on escalators, believe it or not. Always going one way while he was going the other; yet, inextricably bound. Never introduced myself or gushed. Somehow, that didn’t seem like the right move.

So he and I exchanged head nods. Cool like that. He didn’t know me from Adam. But I felt like I knew him. And he was all right with me.

Life kept moving as life does. My time in South Florida was all about making a name for myself as a print journalist. Until cancer punched its way into my family and left a gaping hole. The same year that Scott was starting at ESPN, I was starting the year without my mother. She died of lung cancer at the age of 56 during the Christmas of ‘92. And in 2000, when I was burying my father, who also died of lung cancer, Scott was bouncing his youngest daughter, Sydni, I was pondering the definition of family when so much of mine was gone.

I know, it might seem like I’m reaching. Seeing connections that aren’t real. I don’t know. I just feel like I was more than a fan. A kindred spirit, perhaps. See, the same year I buried my father, I adopted my first child. A year later, thanks to a friend I made while I was a University of Michigan Journalism Fellow, I got the chance for a do over. A chance to interview for a big girl job at ESPN. No more part-time hustle. This was a chance to go pro.

Although I’d fantasized for years about what it would have meant to be a trailblazer and lead the way for Scott, now I was getting a chance to follow, somewhat, in his footsteps. While the job I was interviewing for was in production, I had a candid discussion about the possibility to moving into an on-air spot someday.

It was a good interview that ESPN left open for me to pursue. I was jazzed. Then I realized halfway through my plane ride back to South Florida that the only thing I truly remembered talking about with the guy was our kids. I was a new single mom of a little girl. I was contemplating uprooting her to take a job that meant working the overnight shift. In the end, I couldn’t do it.

Little by little, my focus shifted. I gave up the ESPN channel for the Disney channel. Adopted a second daughter, and lost myself in tutus and Crayolas. In 2005, I was diagnosed with lupus and by 2007 the illness was taking a toll. I left my newspaper job in 2008, exhausted and in a lot of pain. I did not know that during that same time, Stuart Scott was beginning his battle with appendix cancer.

So here we are. And it’s weird, you know? I ended up moving from South Florida to Central Florida to raise my two girls. The same TV market where Stuart Scott began. And he died during the holiday season, just like so many of my relatives. Tell me that’s not some sort of karmic convergence.

I really wanted to see him win his battle. But as he said in his Espy Award acceptance speech in July of 2014, “When you die, that does not mean you lose to cancer. You beat cancer by how you live, why you live and the manner in which you live.”

We can all learn a lesson from Stuart Scott, the best friend I never knew.